Please be sure to review and agree to SOLVE's Volunteer Safety Guidelines before attending an event. 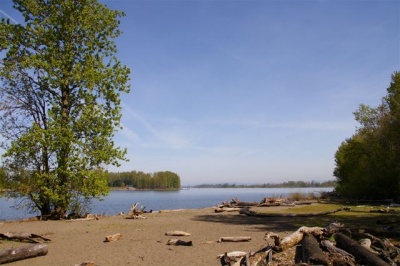 Nearest town is Portland, OR

The Willamette River, Multnomah Channel, and Columbia Rivers meet at Kelley Point. The sandy beaches surrounding the park accumulate litter from the river and from beach-goers.

From the South Lot, take a paved path that leads into the tall cottonwood trees. Go left on another paved trail to a meadow - a perfect picnic spot. Unpaved paths lead to the narrow, sandy beach. Across the Willamette are the fields of Sauvie Island.

History of the park

New Englander Hall Jackson Kelley (1790-1874) was one of the most vocal advocates for Oregon in the first half of the 19th century. In 1828 he published Settlement on the Oregon River, and nine more pamphlets on a similar theme over the next 40 years. A bit deranged, he spent most of his life bitterly trying to win notice - and payment - for having sparked American interest in the Pacific Northwest.

Kelley visited Oregon briefly in 1834. During that time, Sellwood, Milwaukie, and Oregon City were all vying with Portland to be the main city at the north end of the Willamette. Among these was Kelley's unsuccessful attempt to establish a city at the confluence of the Willamette and Columbia Rivers. In 1926 this site was named Kelley Point.

Kelley Point Park was originally owned by the Port of Portland which covered the flood-prone peninsula with tons of river dredgings. The site that was once envisioned as a city is now a park on an isolated tip of land.